Deadly Delinquents, Deadbeat Dads, and the Dangers of Demonization

In handling a very sad case in court today (a case I am sure I "won" but which brought no joy or triumph), I had a bright moment early on when I had the opportunity to speak at some length with a wonderful psychologist who works regularly with children, and spends a lot of time in juvenile court trying to help children to recover and to rebound from truly horrific circumstances. The optimism of this wonderful man cheered me up somewhat. When I complained about how depressing the juvenile cases often are, he told me he rather enjoys his role in helping to protect these children in court, and nurture these children through therapy.

It is easy for most of us to forget that just as children are resilient as victims, they also are capable of redemption and rehabilitation as offenders. If they can overcome the trauma of abuse, and other horrible experiences, and go on nonetheless to lead healthy adult lives, as so many do, they can also redeem themselves and be rehabilitated, even when they themselves have committed horrific acts. But we are all too quick to demonize and discard them just as we do adult perpetrators.

In some circumstances, for example when children engage in inappropriate sexual contact with other children, contact that would be considered abuse if initiated by older individuals, we don't actually label these child actors "perpetrators" but instead treat all the children in the situation, both the actors and the acted upon, as the unfortunate "victims." But there is a line that can't be crossed, it seems. If a child's crime is too horrific, these days we just give up on the child, forever, and lock him up and throw away the key, just as we would do with an adult perpetrator of such a crime. Our favorite way to rationalize this approach is to pretend that the child is actually an adult.

There recently appeared an excellent article by Sherry Colb, in a Findlaw Column on October 29, 2007, exploring the question of why we are now so quick to lock children up and throw away the key: Why Does the U.S. Sentence Adolescents To Life Without Parole? As Colb points out in her article, we did not always have this harsh approach, and our attitude seems somewhat dissonant with our basic sense of optimism. She postulates that we are somehow afraid of our own optimism, and lock up the children out of a sense of fear of that optimism. I am not exactly sure I agree with this theory, if I even understand it correctly, but it may be right. But I think there may be a simpler explanation for our harsh policy toward deadly delinquents. It is in our entire criminal justice system, that is, in our system for actual adults (not just the adolescents whom we selectively and inconsistently treat as adults), that we have become less forgiving, more punitive, and more willing to give up on people. Demonize. Discard.

I'm not sure that we should blame our harsh penal approach on any fear of our own optimism. I think there is something more distasteful at work here. It is fear, Colb is right, but it is a kind of fear that is making us lose our humanity. The U.S., in permitting its states to lock up children for life without parole (and Massachusetts is one among the vast majority of US states that presently do this), is quite arguably in violation of international human rights law. In 2005, the U.S. Supreme Court finally outlawed, in Roper v. Simmons, capital punishment for juvenile offenders, but that hardly brings the U.S. in compliance with human rights law, as I understand it.

Colb in her article provides a history of the developments in international law on the specific issue of life without parole for children. For more information about the issues of juvenile justice and human rights law, see the Human Rights Watch report of 2005 http://hrw.org/reports/2005/us1005/. We have moved away from state-sanctioned killing of juvenile offenders, but we are still guilty of a lesser international human rights law violation by locking up children and throwing away the key. That is because we let our anger cloud our minds and we allow ourselves to demonize these children. We inevitably lose some of our own humanity when we do so. (Just as we do when we lock up "enemy combatants" as we did in Guantanamo. Just as we do when we commit acts of torture....but I digress.)

I have witnessed a lack of humanity in many prosecutors, who often find it easiest to view perpetrators, of whatever age, as purely evil, subhuman creatures for whom no punishment is too great. This inhumane, simplistic prosecutorial attitude was bizarrely evident in a recent guest article, on October 13, 2007, in the Washington Post by Wisconsin "deadbeat dad" prosecutor Mary Wagner - LINK to Washington Post article, Mary T. Wagner - Corralling Deadbeat Dads - washingtonpost.com, which is a tale about her experience prosecuting deadbeat dads.

Wagner seems to take delight in demonizing and punishing these men (I say men because we do not hear about the prosecution of any deadbeat moms in this article), and appears to lose all perspective. Particularly troubling for me was the following passage:

"The case is never about whether the deadbeat dad failed to make any payments for 120 consecutive days, earning himself up to a year and a half of 'maximum confinement' in prison and two additional years of 'extended supervision' reporting to a probation agent. It's about how the parent who stayed with the children had to work two jobs, never caught a break and sometimes had to take government assistance, and how the kids in the middle of it all felt abandoned -- how their world fell apart when Dad left.

Sometimes it's about a 10-year-old child coming to court with Mom, smiling but nervous with anticipation, wondering if the father who's been gone for years will recognize her in the gallery as he sits on a bench up front, wearing an orange jumpsuit and chains, waiting for our dance to begin. Those scenes never end well...."

It is terrible, Wagner says, that this dad has not paid child support. Yes, absolutely. But why not object to the sad fact that this child has been brought into the courtroom to witness her father in an orange jump suit and chains. The child, despite the child support arrears, apparently was fed and clothed while sitting in court, but how was that child feeling? It is horrible that the father doesn't know this child, agreed. But is it not also horrible that this mother brought her child into court to see her father in this circumstance? Have we all been desensitized by Jerry Springer?

I'm bothered that while Wagner can so easily demonize this dad, and discard him as a useless, evil deadbeat, there is not even the hint of the possibility that he might be worthy of some respect, and that after he finally gets out of jail, he might actually pay child support and even spend some time with his child.

There is a strong correlation between the payment of support by noncustodial parents and the degree of contact they have with their children. If we're really concerned about both support and parenting time, about the best interests of children, we should have a broader perspective. Sometimes there are deadbeat dads, and deadbeat moms as well, and sometimes they truly are demonic. Sometimes they never come around. But parents, and prosecutors, and judges, should always leave room for redemption, at least as long as these children are still children. 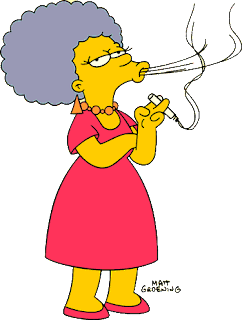 I'm reminded of a wonderful adult-like line of Lisa Simpson on an episode of the Simpsons, when her Aunt Patty was criticizing Homer in front of Lisa and Aunt Patty admitted she was "just trashing your father."

"I wish you wouldn't," said Lisa, "because aside from the fact that he has the same frailties of all human beings, he is my only model of manhood, and my estimation of him will govern the prospects of my adult relationships. So I hope you bear in mind that any knock at him is a knock at me, and I'm far too young to defend myself against such onslaughts."