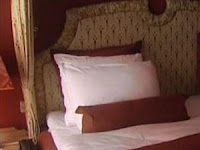 We have long had destination weddings.  Why not destination divorce?  Zagat has published a guide to the best restaurants for dumping your mate, as I have reported here two years ago.  There are already restaurants you can visit to dine and dump your spouse, so why can't there be destination resorts or hotels where you can go to make that dumping official?

It's not so easy just to head to the beach, or somewhere exotic, to get an actual legal divorce, you say? Well, not only are some enterprising travel businesses trying to sell the idea of divorce vacations, in Mexico and elsewhere, but there is now even, in the Netherlands, what is called the Divorce Hotel (Hotelscheiden). If you are Dutch, you can actually show up at a five-star hotel for about three days with your spouse and mediate your divorce settlement, spending potentially far less time and money on the trip and the luxurious hotel accommodations than you might otherwise have spent on legal fees back home.

Or so they say.  So far, the new idea has only had a small number of takers, and it is of course only available to Dutch citizens.  Take a look at the Divorce Hotel's website and video.

It's official!  Around 4 PM yesterday, Governor Deval Patrick signed into law the alimony reform bill.  (See my discussion of this in my last post where I link to previous blogs on alimony reform).  The new law goes into effect March 1, 2012.  Go ahead and peruse the complete text of the new law, or check out the well-written summary of the new law provided by Francine Gardikas of Burns & Levinson at their law firm's family law blog, Massachusetts Divorce Law Monitor.

At long last, a sweeping alimony reform bill, passed by both houses of the Massachusetts state legislature, has been sent to the Governor's Desk, it was reported on Monday. Governor Patrick has 10 days to sign it, and there is nobody saying that he won't. In fact, I just heard from a reliable source that the Governor will sign it on this coming Monday.

What started long ago as an impassioned struggle has in recent years gathered strength as Massachusetts Alimony Reform, a new organization directed by Steve Hitner, came into being. The Massachusetts Alimony Reform organization came onto the scene with a tenacity, dedication, and persuasiveness that caused many, including opinion makers in the media and in politics, to wake up and pay attention.

A House bill which called for real reform was countered by a Senate bill that was, by contrast, a slight tinkering with the law that would not really have changed or helped much. Fortunately, as support for real reform continued to grow, and political support became apparent, it came to pass that legislators, lawyers, and bar associations all moved in the direction of supporting real reform. Now, with the passage of the final version of the legislation by both houses, real reform has prevailed; in other words, the final version is much closer to the original House bill than to the Senate bill, and it will bring about very substantial, extensive reform. Thus an alimony reform movement which once had only limited vocal support from a handful of family law litigants, legislators and attorneys, eventually gained very broad support - indeed support of seemingly everyone, including many lawyers and bar associations that had previously ignored, dismissed, minimized, or opposed any serious alimony reform efforts.

With the passage of this alimony reform legislation, we will see the law of alimony in Massachusetts at last reflect the social and economic realities of our time. I expect alimony determinations to be much more sensible and predictable, and much fairer as a result, as previously lengthy or even lifelong awards of alimony, many of which were out of all proportion to the length of the preceding marriages or the equities of their respective cases, will become a thing of the past. Although I have a few reservations about one or two provisions of the bill, overall I am very pleased with the legislation and I have no doubt the new law will be a huge improvement over the current law.

I will have more thoughts to express soon. Meanwhile we all await the official word that the Governor has signed this bill. For a brief description of the bill, see Alimony Reform Heads to Governor's Desk, Monday's Boston Business Journal article on this.

From The Docket, the Massachusetts Lawyers Weekly blog, David Frank brings us this interesting story behind the Red Sox loss yesterday to the Orioles:   a civil process server showed up at Fenway Park and served child support papers on Red Sox starting pitcher Erik Bedard a few hours before the pitcher was scheduled to take the mound.

Don't the Red Sox have enough problems right now?  And get this - to add insult to injury, the process server was wearing a Yankees shirt!

Many sham marriages - fraudulent marriages which often lead to residency and ultimately citizenship benefits for immigrants - go undetected each year by the United States government.   But sometimes sham marriage immigration schemes are uncovered, as in this recent example from Vermont, as reported in the Boston Globe, A Marriage of a Dream and a Scheme, in which case illegal immigrants (mostly, if not all, from Brazil) paid Americans to marry them to get legal residency status.  According to the article, Maria-Helena Knoller, a Holyoke woman and  Brazilian immigrant responsible for the scheme, was recently prosecuted and convicted for marriage fraud and concealing and shielding illegal immigrants in the case of 32 sham marriages, and is now out free on a $100,000 bond and working in a Chicopee Donut shop while awaiting sentencing.  22 of those 32 sham marriages occurred in Brattleboro, Vermont, and half of these 32 sham marriages have already ended in divorce here in Massachusetts.   Apparently, the scheme seemed to begin and end in Massachusetts, although many of these participants were led across the Vermont border to Brattleboro for their nuptials. (There were seven other additional sham marriages revealed, but Knoller was not prosecuted for those.)


Knoller, it turned out, was a matchmaker of a special kind. For fees as high as $12,000, she would pair illegal immigrants from Brazil with Americans, arrange their marriages - and, in some cases, their subsequent divorces - after they received status as “lawful permanent residents’’ of the United States.
She pleaded guilty in February to federal charges of marriage fraud and concealing and shielding illegal immigrants for 32 of those marriages. But her prosecution is an exception, and Knoller’s case is a vivid example of how easy it is for illegal immigrants to dodge US immigration laws by getting married.
The US government estimates that of the 200,000 marriages that result in temporary or illegal immigrants receiving green cards each year, up to 30 percent are shams. And yet, while billions of federal dollars are devoted to protecting borders, enforcement efforts aimed at immigration fraud are hobbled by sparse budgets and understaffed agencies that, according to government auditors, allow an estimated 60,000 sham marriages a year to evade detection.
“The process of weeding out the fraudulent [marriages] - those arranged solely to obtain … a work permit and green card - is nearly impossible,’’ said David Seminara, a former US consular officer who wrote a 2008 study that faulted the process of identifying fraud in immigration petitions filed domestically and overseas. “Even when documentation is asked for, to show that the couple is living together, it’s easily doctored. There’s just too many applications and too few immigration officers handling these cases.’’
Taking her clients to Vermont for their nuptials made Knoller’s scam easier. Vermont does not require waiting periods or proof of identity to obtain a marriage license. While some of the 32 marriages for which Knoller was prosecuted were licensed in Connecticut and Massachusetts, 22 occurred in Brattleboro. Massachusetts, and every other state bordering Vermont, requires proof of identity.

A Couple More Massachusetts Blogs for Your Blogroll

In the nearly two years I have been absent from the blogosphere (from November of 2009 until today), I have noticed a number of good Massachusetts legal blogs that either weren't around before, or just hadn't caught my attention yet. There are in particular two I would suggest that you check out, and add to your blogroll as well:

1) Scaling the Summit: A Family Law Blog. This blog is primarily the work of Justin Kelsey and his associate Jonathan Eaton and is published by their law firm, Kelsey & Trask in Framingham. Much thought and analysis has gone into this blog, and there is very helpful information about recent, and pending, legislation in the area of alimony reform (which is about to become law at last) and proposed custody law reform.

2) Massachusetts Elder Law Blog. This is an excellent blog I have recently enjoyed reading by elder law attorney Sasha Golden of the Golden Law Center, a practice devoted to elder law and disability planning in Needham.

As a result of state budget cuts that have led to a reduction in staff in the court system, which is suffering from "case backlogs and staff shortages," many of the Massachusetts state courts (38 of them, to be exact, including all of the Probate and Family Courts) have reduced their public office hours. All the family courts will now have registry and phone coverage restricted after 3 PM on Monday through Friday. (However, apparently the Springfield family court will continue to stay open until 4:30, as Hampden County Register Thomas Moriarty has vowed to do so because he does not want to "deny our most important stakeholders, the taxpaying public, access to justice.")

Court sessions will continue as before, beginning at 8:30, and the only thing that will change will be the public office hours and phone coverage in the registry offices. So if you have business you need to transact with the family court registry in your county, make sure you get to the courthouse and to the registry's office, or make your phone calls, well before 3 PM. This change has been reported to be aimed at giving a shrunken staff more time to handle administrative work at the end of the day, free of interruptions from visitors to the front desk by individuals and attorneys.

I imagine it is sort of like what the banks do when they shut the doors to customers but keep the lights on while their workers continue to carry on their business at the end of the afternoon. For more info, including information about the other courts affected (some of the district, housing, juvenile and land courts), see the Supreme Judicial Court's press release.

FROM THE PRESS RELEASE:

Probate and Family Court
All Divisions
Registry Counter and phone coverage restricted after 3 p.m. Monday through Friday. Applies to any court business, except emergency restraining orders and other emergencies. Court sessions still will begin at 8:30 a.m.

[BUT see first paragraph above: Hampden County's Probate and Family Court will stay open until 4:30 as before.]

Back to Blogging Again!

I have neglected my blog here for quite some time. I see my last post was in November of 2009! I could explain why I have been gone so long, and give all kinds of excuses. But it really is simple. I stopped blogging at a time when I was extraordinarily busy, and just never got back to it.

Until now! I hope once again to contribute some of my thoughts on divorce and family law and other issues that concern me and my practice, as I continue also to spread the word about ideas and information from others in this field.

As usual, I welcome your feedback here!